One common and seemingly random issue that many BMW owners experience is that their BMW trunk tends to open by itself. This seemingly odd problem can be very frustrating. Luckily we have the answer to common causes behind why your BMW trunk opens by itself and how to fix it.

Your BMW trunk may be opening by itself due to accidentally pressing the key fob while it’s in your pocket, a misaligned latch hook, faulty electronics, or in an extremely unlikely situation a nearby BMW driver with the same coding on their fob. This is a persistent complaint among BMW drivers with automatic trunk lid operation.

So, if you’re a BMW driver and have experienced your trunk randomly opening by itself, you’re not alone, and we have found some of the common causes behind this issue. And, if you’re looking for a solution, we can help you fix it!

Why Does A BMW Trunk Randomly Open By Itself?

All modern BMW models come with an “automatic trunk lid operation“, which gives you a hands-free way to open your trunk, which comes in handy when your hands are full (after shopping for groceries, for example). This allows you to kick your foot underneath the trunk, and it will unlock and open without having to put everything down on the floor.

However, some drivers have encountered problems with the mechanism, and it can be more of a source of annoyance than an aid. If the trunk opens by itself while the vehicle is parked in your garage with a low roof, it can cause damage and leave your car dented. It could even open by itself while driving, causing the items stored in your trunk to fall into the road and cause a dangerous road accident.

Nonetheless, if you want a solution, we will need to diagnose the problem and determine why it keeps doing this or take the vehicle to a mechanic. If you are having this problem, it is very likely due to one of the common issues that BMW drivers have identified. Here are a few potential reasons why your BMW trunk opens by itself:

Your trunk is opening by itself because you’re accidentally pressing the trunk button on your key fob while it’s in your pocket. You may be bending down, or it could hit your cellphone, or you could have simply bumped your thigh against a surface like a counter.

You may accidentally press it when taking something else out of your pocket. There are many ways that this could happen, but this is frequently the source of the problem.

The second most common cause behind your BMW trunk opening by itself is a misaligned or faulty latch hook/anchor.

The BMW trunk uses a latch and striker mechanism to automatically open and close, with the striker on the tailgate and the latch attached to the car’s body.

Overtime, especially if you slam the boot, the striker or the latch may be pushed out of place and will therefore not connect correctly, making your trunk vulnerable to opening by itself. This misalignment could also be caused by other physical damage such as a dent due to being rear-ended.

Suppose you’ve ruled out the primary causes of accidentally pressing the key fob or a misaligned trunk striker or latch. In that case, there are some other less prevalent causes that some BMW drivers have identified in online discussions.

One of the less common causes is that the automatic trunk lid operation becomes faulty due to water damage. Some drivers found that the problem only occurs in wet weather. Your trunk may not be adequately sealed, and rainwater or snow has seeped into the electronic sensors and damaged the electronics.

Another potential yet HIGHLY improbable cause is that there is another BMW driver that’s nearby ) potentially a neighbor) whose key fob has been programmed with the same coding, meaning that when they open their trunk, it signals to your car as well. However, this would be a pretty wild coincidence, but it is certainly not impossible.

How To Stop Your BMW Trunk From Opening By Itself

Keep Your Keys In A Pouch

If you’ve found that you’re accidentally pressing the key fob while it’s in your pocket, a great solution is to store your keys in a pouch before putting them into your pocket. Pick something durable that your keys will fit in perfectly and place a small card, such as a debit card, in the pouch, with the side of your keys that has buttons turned towards the card. 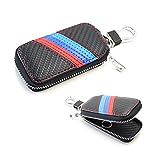 The card will provide an even surface that will prevent your buttons from accidentally getting pressed when your legs are bent. This will reduce the chances of your trunk opening by itself, even though it takes a bit more effort. Just think about the alternative (potentially dangerous situations), and you’ll realize that the tiny bit of extra time you’re putting your keys in a pouch will be worth it.

If the tailgate’s striker or latch has been misaligned due to damage, you can easily realign the latch/striker with a screwdriver. Take a look at this comprehensive video (a little too lengthy but very helpful) on this simple DIY fix.

Regarding other issues that could be causing your BMW trunk to open by itself, such as water damage or nearby BMW drivers with key fobs that have the same coding, it is unlikely that you’ll have the tools to rectify this problem if you’re not a qualified mechanic.

In that case, seek advice or enlist the services of a technician at your nearest BMW dealership so that they can help you assess the damage and provide solutions to fix the problem. It may seem like an unessential expense, but you’re better off just paying whatever it costs to fix this annoying problem.

So, suppose you’re a BMW driver, and you’ve found that your trunk opens by itself. It may be caused by unintentionally pressing the trunk key on your key fob, a misaligned striker or latch on the trunk, water damage, or identical coding on your remote to a nearby BMW driver. You can solve these problems by keeping your keys in a pouch, re-aligning the latch hook or striker, or by enlisting the services of a qualified technician or mechanic.