The bmw e36 idle control valve is an incredibly important component in your vehicle’s performance. The ICV regulates the car’s idle based on how much air is getting to the motor. Idle Control Valves typically have two components to them, a sensor that sends information back to the computer and the actual valve which opens and closes.

Most idle control valves are located somewhere on a vehicle’s intake manifold. Some, such as the one on my Ford Ranger, takes about thirty seconds to remove and replace, whereas others such as the valve on my four-cylinder e36 can take well over an hour of your time. A failed idle control valve can cause a number of issues in your vehicle, to the point where it will stall out.

In this article I will discuss the symptoms of a bad ICV, the four cylinder and six cylinder E36 ICV removal process, and how to clean the ICV.

You can pick up a high quality Bosch E36 idle control valve here.

Clogged idle control valves do not cause a check engine light to pop up on an E36. However, if the motor inside the valve is fried, this will send a signal to the ECU and result in a check engine light. This is definitely the easiest symptom to notice. Be forewarned however, if the electrical component on the idle control valve is bad, no amount of carb cleaner will make the valve work correctly again. You will have to replace the valve.

When I began noticing an idling issue in my brother’s vehicle, initially the car would start and the rpms would bounce up and down for a minute before finally leveling off. I figured this was not a vacuum leak, because of the eventual leveling off of the idle. Idle Control Valves typically give you a warning in the form of either an odd idle or a check engine light, before they fail completely and the car stalls out.

Idle Control Valves typically get clogged overtime with carbon deposits, and typically need to be cleaned or replaced every 80,000 miles. When I cleaned out the ICV valve on my little brother’s 318i, his vehicle wouldn’t even hold an idle. A clogged idle control valve will exhibit similar symptoms to a failing motor, except that it won’t throw a check engine code.

Before You Clean the Idle Control Valve

Before cleaning the ICV I would suggest examining the vacuum lines. Cracked vacuum lines can cause similar symptoms to a faulty idle control valve. An extremely common occurrence for BMW’s is for the main intake boot (connects to the throttle body and idle control valve) to develop a hairline crack. It does not have to be a huge crack to cause an idling issue, and I have seen this boot crack on every E36 I have ever owned. 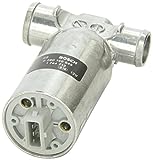 New BMW owners may be surprised at the location of the ICV on their vehicle. On most American cars the ICV is extremely accessible at the top of the intake manifold Typically, they can be removed and cleaned without having to remove any other parts. However, BMW’s are different, especially the four cylinder 318i.

The ICV is located underneath the intake manifold on BMWs, which makes the process of cleaning the ICV significantly more involved.

The six cylinder BMW ICVs can be accessed without having to remove the intake manifold, however the four cylinders require removal of the upper intake manifold to gain access to the ICV.

To get to the four cylinder BMW ICV the entire upper intake manifold must be removed. Because of this, I highly recommend that you replace several other components when you remove and clean the ICV. The PCV valve is also located underneath the upper intake manifold, and there are vacuum hoses that connect to the fuel injectors that nine times out of ten will be cracked.

Luckily for us six cylinder owners, the idle control valve removal is a less involved process. No need to remove the intake manifold, however you will need to remove several things to gain access to it. My advice if your pulling the valve is to go ahead and purchase the ICV grommet as well, along with a throttle body gasket if you have not pulled and changed it recently.

You can also take a small flathead screwdriver and open up the valve, once you have it opened spray the crap out of it and watch the black colored spray come out on the other side of the valve. Once you are satisfied with your cleaning and you’ve allowed the idle control valve to dry out you can reinstall it!

I hope this article has helped you out with your idling diagnosis! If your curious about other repairs related to fixing a rough idle check out this article!